Story and photos by Mark Kariya
The U.S. ISDE World Trophy team added to its lead on Day 4 at the 2019 FIM International Six Days Enduro, while the U.S. Women’s World Trophy and Junior World Trophy teams maintained first and second place in their respective classes.
Even with the challenges of competing in Thursday’s cold and windy conditions, U.S. World Trophy riders Steward Baylor, Taylor Robert, Kailub Russell and Ryan Sipes stretched their collective advantage over Australia to 1:27.46 seconds. Italy sits in third place, 6:41.13 back of the American team.
Robert posted the third-fastest overall individual time of the day and remained the E2 class leader.
The field competed on the same layout as it did on Wednesday, completing two laps of the layout for another 165-mile day. Baylor had a standout day, finishing fifth overall individual. Russell was seventh fastest on the day, and Sipes was ninth.
“All in all, I think it was a good day,” Robert said. “Stew really picked it up today; he went from—I don’t even know what he was yesterday, 20-something—and today he was [fifth] overall, I think. So, he really picked it up. That was awesome. Kailub and Ryan made some mistakes. I know Kailub crashed a couple times, and I don’t know if Ryan crashed, but he was a little off compared to yesterday. All in all, though, it was a good day. As long as we’re putting time on instead of losing time, we’re happy. We’re going to push and try to get through tomorrow, hopefully maintain the lead tomorrow and go into the final moto with a little bit of a cushion.”
Sipes was delighted with the team’s performance on the day, and was happy to be in such a strong position on two-thirds of the way through the grueling event.
“I missed out on the 2016 championship team, the winner [in Spain], so I want to be on one,” he said. “That’s the goal, is to stay solid and have some good test times tomorrow and keep her up top.”
In Women’s World Trophy division, Australia lost any chance for a seventh-straight title when GNCC champ Tayla Jones crashed out. That team is now solely represented by Jessica Gardiner.
For the German team, another strong showing by team leader Maria Franke helped it leap up in the standings to second, 5:14.00 behind the American squad. Franke posted the top women’s time for Thursday, followed by Jane Daniels of Great Britain and American Brandy Richards. The other American riders, Becca Sheets and Tarah Gieger, finished the day sixth- and eighth-fastest. In the individual standings, Franke now has a 1:26.25 lead over Richards.
“It was not the greatest [day today],” Richards said. “I really struggled on the first test and the fourth test. It was so muddy. I was mostly just trying to stay off the ground. Even with trying to do that, it set me back a little bit. [In one test,] I couldn’t even put my feet down because they would just slide out from underneath me.”
America’s Junior World Trophy riders Grant Baylor, Ben Kelley and Josh Toth lost ground to Australia in the class standings, with the gap growing 8:52.50. Baylor ended up with the best time of the American Juniors on Thursday, ending the day 19th individual overall despite a big crash in one test.
Italy is almost three minutes behind the Americans, though that position could be tenuous with one of Italy’s riders unable to start his bike at the end of the day.
In the Club team standings, the American XC Gear team of Dante Oliveira, Ricky Russell and Austin Walton continued to lead the field of 124 Club teams, stretching its margin over a team from France to 13:20.49.
Oliveira managed to post the day’s fastest Club time by the slimmest of margins, finishing 0.94 seconds faster than Frenchman Antoine Meo. Russell was third on the day, with Walton placing ninth.
“I kind of struggled today, just made too many mistakes,” Russell said. “I think I was over-riding and went down in four of the seven tests—just little mistakes, nothing huge, just tip-overs and whatever. So, I’m still okay and everything, but yeah, stupid mistakes kind of cost me time and you can’t do it in a special test….The rain kind of changed the whole course today, but I like the rain.”
The Gas Gas USA team (J.T. Baker, Tyler Vore and Trent Whisenant) held onto ninth place in the Club standings, and Mojo Motorsports (Anson Maloney, Josh Knight and Tanner Whipple) dropped from 13th to 14th. The Eric Cleveland Memorial team (Kevin DeJongh, Nic Garvin and Austin Serpa) slipped a spot to 17th, and the Elizabeth Scott Community team (Jayson Densley, Paul Krause and Brian Storrie) fell three places to 34th in class.
The Missouri Mudders team (James King and Nathan Rector) is in 74th place (up from 75th after losing Anthony Krivi on Day 3), and the AMA District 37 team is in 83rd. Nate Ferderer the only one still running for the AMA District 37 team after losing Blayne Thompson and Jacob Argubright and consecutive days to mechanicals. Ferderer is currently 31st in the individual Club rider standings.
On Friday, the field will face a of 178-mile day with six tests scheduled. 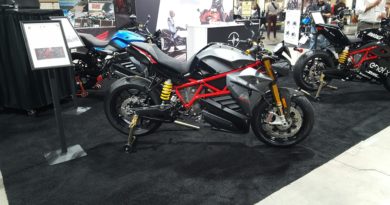 November 22, 2019 Jim Witters Comments Off on The AMA is at the Progressive International Motorcycle Show in Long Beach 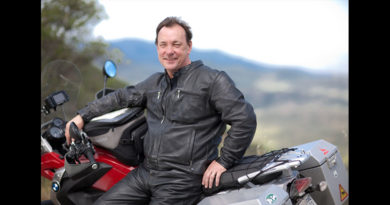 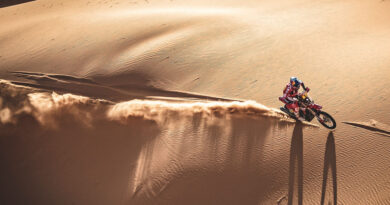