Story and photos by Mark Kariya
PORTIMAO, Portugal — Three American ISDE teams ended Day 5 of the 2019 FIM International Six Days Enduro with a larger lead than they started the day with.
The U.S. World Trophy team of Steward Baylor, Taylor Robert, Kailub Russell and Ryan Sipes increased its lead over Australia to 2:02.52 seconds. Italy ended Day five of the six-day off-road competition in third place, 11:57.30 behind the American quartet.
With one day of competition remaining, the American World Trophy effort is in prime position to take the United States’ second ISDE World Trophy title in four years.
Russell put in the top performance by an American rider on the day. His individual time was the third-fastest overall on Friday, 0.76 seconds ahead of teammate Robert. Sipes was sixth fastest, giving the team three riders in the top six overall on Friday.
In the Junior World Trophy division, the U.S. ISDE Junior World Trophy team of Grant Baylor, Ben Kelley and Josh Toth outpaced class leader Australia by about 14 seconds on Friday. Grant Baylor’s test times putting him seventh overall, which made is the highest-placed Junior Trophy rider on Day 5. It was his first time finishing a day in the top 10, which is a goal he’s had for himself all week. Kelley was 12th fastest on Friday, and Toth was 23rd. The American junior squad now trails Australia by 8:39.20, with Spain in third almost 20 minutes behind the American team.
“We’ve all been fast,” Kelley said. “[We’ve] just had a lot of issues [like] crashing and things. But yeah, still pretty solid for the team. I think I had the speed and everything to [finish in the top 10 overall for the week], but I just made too many mistakes and had some issues. It’s just a long race, six days.”
There’s also a good chance for a class victory with the U.S. Women’s World Trophy team of Tarah Gieger, Brandy Richards and Becca Sheets. The trio extended its lead over Germany to 8:35.22, with Great Britain almost 10 minutes farther behind.
Richards relished the drier conditions of the afternoon and posted the fastest women’s time on Friday. Gieger finished the day fifth in class, and Sheets ended up seventh-fastest. However, Richards had lost time trying to navigate muddy conditions on Wednesday and Thursday, which has relegated her to second place in the individual class standings. Sheets is currently in sixth place in the individual standings, and Gieger is in eighth.
U.S. ISDE Team Manager Antti Kallonen was impressed with how well all four World Trophy riders performed Friday and expects to team to err on the side of caution with a  World Trophy title within reach.
“It’s a good lead, so the guys don’t have to push super-hard [in the final motos tomorrow],” Kallonen said. “But really, the final motos could be mayhem, especially now [that] it’s on a [go-kart] track. Anything can happen—you lay your bike down on the asphalt and that could be it. We’ll probably try to play it safe and try to stay out of trouble tomorrow with the Trophy team and bring it home.”
Kallonen continued, “Juniors, they were riding well today; they’re picking up the pace. [Beating the Australians today] is always a nice little confidence boost, but [Australia] had such a big lead already…. It’s a good boost for the guys and brings the spirits up for tomorrow. In the Junior [class], all scores count so it’s really not over. I mean, I’ve seen it so many times—something happens in the final moto when the score has to count and it can be over in a second. So, we don’t give up our hope and we’ll see what tomorrow brings us.”
Kallonen also praised the U.S. Women’s World Trophy team’s effort on Friday and was happy to see the team add to its lead heading into the uncertainty of Day 6.
“We’re in a good position tomorrow,” he said. “[With the] cushion we have now, we should just bring it home. We have all three riders going strong and [just] two scores count. So, we feel pretty confident going into tomorrow with the women.”
Not to be outdone, the American XC Gear team of Dante Oliveira, Ricky Russell and Austin Walton once again topped the field of 124 Club teams, putting an additional three minutes between it and the second-place team from France. The team’s overall class lead is now 13:20.49.
Oliveira clocked the day’s fastest Club time for the second day in a row. He was 8.39 seconds faster than any other Club competitor in the ISDE field. Russell was third-fastest in class on Friday, while Walton made big gains to put in the fifth-best time by a Club rider on the day.
The Gas Gas USA team (J.T. Baker, Tyler Vore and Trent Whisenant) moved up one spot to eighth in the Club standings, and Mojo Motorsports (Anson Maloney, Josh Knight and Tanner Whipple) likewise climbed up one spot to 13th. The Elizabeth Scott Community team (Jayson Densley, Paul Krause and Brian Storrie) also climbed in the standings to finish the day in 32nd.
Eric Cleveland Memorial team rider Kevin DeJongh dropped out of competition with an electrical problem. Though DeJongh’s teammates Nic Garvin and Austin Serpa are riding well, DeJongh’s DNF adds three hours to the team’s time for Friday, which dropped them to 50th place.
The Missouri Mudders team (James King and Nathan Rector, with Anthony Krivi dropping out on Day 3) held at 74th place, while the AMA District 37 team is now 119th since Nate Ferderer is the only rider still competing. The team had Blayne Thompson and Jacob Argubright drop out of competition on consecutive days due to mechanical failures.
The final day of the six-day event is a short hop across the street to the adjoining go-kart track for the final motos. Though unusual, the hastily built final moto course is said to feature more dirt than asphalt. It brings back memories of the supermoto-style final tests back in Brazil in 2003. 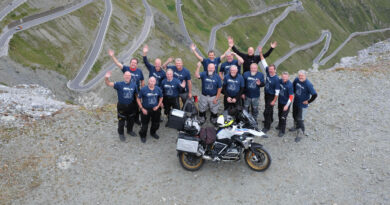 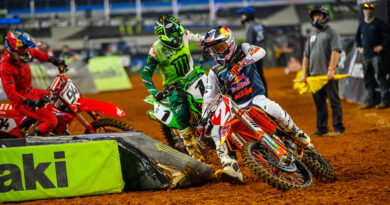