This article appeared in the July 2007 issue of American Motorcyclist.

I’m on a mission to explore missions in California.

I find myself riding on Stagecoach Road toward the California towns of Santa Ynez and Solvang, two small towns full of contrasts.

First, there’s Mission Santa Ines (pictured above), which is actually in Solvang. It was the first mission north of Santa Barbara in a string of outposts located about a day’s travel apart, at 19th century speeds.

Mission Santa Ines is an exceptionally peaceful place today, offering self-guided tours of the old church, several rooms containing artifacts of the era and a serene garden. But the place had a tumultuous history.

Founded in 1804, Santa Ines wasn’t even fully constructed when the original church and other buildings were heavily damaged by an earthquake in 1812. Then, in 1824, the mission was the site of a revolt by the Chumash that reveals much about the history of California’s mission era.

It’s a complex story, but the short version is that while the missions were responsible for bringing agriculture and outside trade to the California coast, they also brought disease and, some say, oppression to the native population.

There’s no doubt that when the missions were established in the years before and after 1800, they were a tool of Spanish conquest, allowing the country to expand its claims on land in the New World from its base in Mexico. But in 1810, Mexico started a War of Independence against Spain.

By 1821, Mexico was free, and its new government had no interest in supporting the Spanish troops guarding the missions to the north. As a result, those troops began to lean more heavily on the dwindling native populations in the missions, who had already been hit hard by European diseases for which they had no immunity.

In many places, conditions got so bad that they have been compared to slave camps. And when a Spanish soldier beat an Indian at Santa Ines in 1824, the native population rose up, burning down the soldiers’ barracks and fighting skirmishes with troops at other missions in the area.

The Chumash Revolt, and complex international politics involving Spain, Mexico and the young United States, all helped bring an end to the mission era at Santa Ines and, eventually, all along the coast.

The descendants of the Chumash have survived, and in recent years, created a legacy of a different kind. Just a few miles from the remains of the old mission is the new Chumash Casino Resort, with gambling, a spa and big-name shows.

As if that contrast isn’t strange enough, you’ve got the town of Solvang itself, which was founded by a group of Danish immigrants in 1911 and has grown into something like a theme park of Scandinavian culture in the California mountains. There are no less than four buildings designed to look like traditional windmills, plus countless shops, restaurants and bakeries serving up, well, Danish.

Just to add to the mix, Solvang was also the setting for the 2004 movie “Sideways,” about a couple of guys going off in search of California wines. So now there’s a whole wine-country layer that’s been added to the tourist cake.

The result, on a weekend morning, is a small town that’s pretty crowded with visitors.

I could easily kill the rest of the day here, but there are roads to ride, including a great collection of them starting on the north end of Solvang.

U.S. Route 101 is just a little way west of here, but my map shows three routes paralleling it for more than 50 miles before merging back into 101 at Santa Maria.

The first is Ballard Canyon Road, a rural two-lane that winds through farms and wine country for five miles up to Route 154. It’s the perfect antidote to the tourist glut of Solvang, but it’s just the start.

I continue straight across 154, and suddenly I’m on Foxen Canyon Road, which is even more rural, offering up fun curves and elevation changes for nearly 20 miles. I settle back and enjoy the relaxed rhythm of the road.

At the far end, Foxen Canyon Road dead-ends into state Route 176 at the tiny community of Sisquoc. My map says I’m only a few miles from 101, but you’d never know it. Here, the biggest thing is the Sisquoc Store, a tiny market that has everything I need for a morning snack, trail mix and soft drinks, and a bench out front to enjoy it. The only thing missing is a gas pump, but why would I worry about that on a gorgeous Saturday?

While I’m soaking up the sunshine, three local riders stop by and give me directions to Tepusquet (tay-poos-kay) Road. To get to it, I backtrack a mile or so, then turn north, traversing a gravel section through a dry creek bed. Then I’m on brand-new pavement that just gets better and better as I ride 15 miles to a junction with state Route 166.

The southern section is a full two lanes wide through an increasingly narrow canyon. Then the road narrows and twists its way up and over a 2,000-foot ridge. It’s a fun rollercoaster ride on a deserted road in the middle of the country’s most populous state.

I’m having a great time until the downside of getting away from it all pops up on the bike’s instrument cluster in the form of the low-fuel light.

The mileage sign when I turn left onto the state highway indicates I’m a full 16 miles from Santa Maria.

OK, but that’s to the center of Santa Maria, right? I confidently estimate that I’ll hit the outskirts of town in a dozen miles or so.

Um, no. In fact, 166 runs into Route 101 a few miles north of Santa Maria, and there isn’t even a gas station at the intersection.

Now I’m starting to get a little concerned. It’s been 20 miles since I first saw the light, and I’m not sure which way to turn to get to the nearest gas station. I decide to head north, since that’s the direction I’m planning to go once I get gas. But as three, four and five miles go by without an exit, I start imagining how far I might have to push a fully loaded bike.

Finally, I spot the exit for Nipomo ahead, and yes, there’s a gas station. I glide in and take on every drop my bike will hold.

Fueled up, I’m ready again to hit the road on a new adventure. 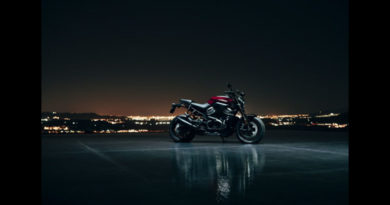 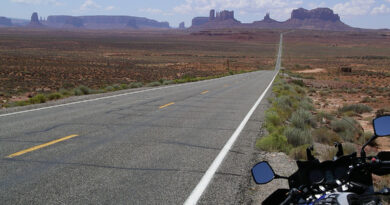 Use your AMA discount to save on MAD Maps

January 18, 2021 Jim Witters Comments Off on Use your AMA discount to save on MAD Maps 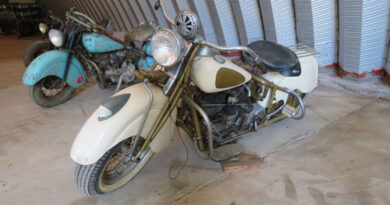 Three ‘barn fresh’ Indians up for auction in Iowa Sept. 27

August 31, 2020 Jim Witters Comments Off on Three ‘barn fresh’ Indians up for auction in Iowa Sept. 27