Mecum Auctions will be auctioning off Yamaha RD400s, Honda 400 fours, Triumph X75 Hurricanes, a Maico 501 and more at its 29th Annual Vintage and Antique Motorcycle Auction on Jan. 21-26, 2020 at the South Point Hotel and Casino in Las Vegas.

Here’s a look at some of the machines being sold. For more information on what is being auctioned and how you can get in on the action, go to www.mecum.com.

Yamaha RD400: Mecum Auctions will sell two 1976 Yamaha RD400s and a 1979 Yamaha RD400 Daytona special during the auction. The 1976 RD400 featured a short wheelbase, light weight, simple 398cc twin-cylinder two-stroke engine and disc brakes. Many aftermarket parts were available, from clip-on handlebars to rearsets to café racer seats and bodywork to bigger pistons, making the bike a favorite among the go-fast crowd.

Honda CB400F: The 1975 Honda CB400F Super Sport, known as the 400 Four, also was a favorite among the café-racer crowd. In 1973, following the introduction of its CB750 and CB500 four-cylinder models, Honda decided to miniaturize the concept with the CB350 Four, one of the smallest production four-cylinder motorcycles ever imported into the United States. The CB350F was a brilliant four-cylinder technical exercise but it was heavy, expensive and no faster than the company’s own 350cc twin. So for 1975, the CB350F became the CB400F Super Sport, with a displacement boost to 408cc.

While the 350 looked like a smaller CB750, the 400 had minimalist, cafe-racer looks, with low, narrow bars for its day, a six-speed transmission and a red zone that started at 10,000 rpm.

Triumph X75 Hurricane: There’s only one 1973 Triumph X75 Hurrican up for auction. AMA Motorcycle Hall of Famer Craig Vetter designed this bike. The U.S. distributor of Triumph and BSA asked Vetter to give a fresh look to the new BSA 750 Rocket III. Vetter gave the machine a dramatically different look by redesigning the gas tank, seat, side panels and even the exhaust system and engine-cooling fins. The Vetter-designed BSA prototype had an American hot rod look to it. Unfortunately, BSA was in its final days and the bike never made it to production. Triumph revived Vetter’s concept a few years later with the release of the limited-edition Triumph X75 Hurricane.

Maico 501: If you have your heart set on one of these beasts, Mecum Auctions has a 1972 and a 1973 on the auction block. Mecum Auctions says the 1972 is the 24th off the assembly line and is restored to original condition. The 1973 is an early desert racer.

Honda RC30: There are three 1990 Honda RC30s up for bid. This bike came standard with a quick-release front fork system and a single-sided swingarm for quick tire changes. The aluminum frame used two curved extrusions to wrap around the water-cooled engine, which was a V-4 DOHC design with four valves per cylinder. The camshafts were gear driven, the brakes were top-shelf with four-piston calipers, and the six-speed gearbox had very close ratios. The engine pumped out a claimed 118 horsepower, good for speeds of more than 150 mph. 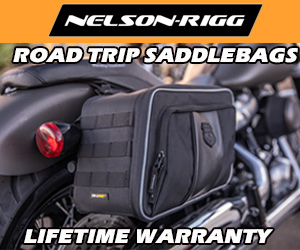 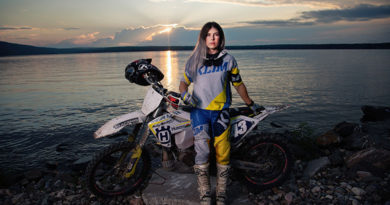 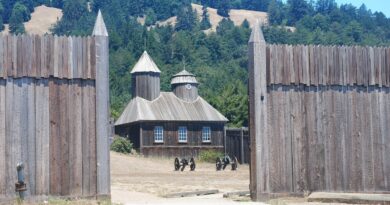 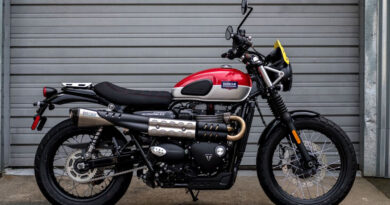 October 17, 2019 Jim Witters Comments Off on Enter now for a chance to win a Steve McQueen tribute bike