Comedian and AMA Motorcycle Hall of Famer Jay Leno is probably the most famous celebrity motorcyclist known to AMA members. But there are scores of other celebrities who share a passion for motorcycling.

Some, like Leno, still ride while others, like actor George Clooney, are former riders. Here’s a look at some celebrity motorcyclists as well some motorcycling ties to celebrities that may surprise you.

Fabio Lanzoni (pictured) is a model and actor well known for appearing in commercials for “I Can’t Believe It’s Not Butter!” Lesser known is the fact that he is a rider who has a collection of more than 200 street and dirt bikes.

Actor Orlando Bloom owns several bikes including a custom BMW S 1000 R. His girlfriend, singer Katy Perry, released a single in 2019 called “Harleys in Hawaii” that she says was inspired by riding as a passenger with Bloom on a bike in Hawaii.

Actress Catherine Bell, best known for starring in the TV show “JAG” and the “Good Witch” TV movies, began riding as a teenager and favors sportbikes.

Singer Pink is a rider who has owned a Triumph Bonneville T100 and a Harley-Davidson Sportster Iron 883. Her husband is Carey Hart, a former pro freestyle motocrosser.

Actor Keanu Reaves not only rides motorcycles but also builds and sells them. About a decade ago Reaves partnered with motorcycle designer Gard Hollinger to form ARCH Motorcycle, which sold its first custom machine in 2014 (www.archmotorcycle.com). His own collection includes a 1973 Norton Commando 850 MK2A, which is the second motorcycle he ever bought. He also is the “custodian” of the 2004 Ducati 998 painted a special green that was in the movie “Matrix Reloaded.”

Actor Brad Pitt rides and owns several machines, including an Indian Larry bike called “When Push Comes to Shove.” In the movie “The Curious Case of Benjamin Button,” Pitt rode a couple classic machines: a red 1931 Indian 101 Scout and a blue 1956 Triumph T110.

Actress Angelina Jolie was a rider and at one point received an MV Agusta from her then-husband Brad Pitt. She rode a Triumph Street Triple R in the 2010 movie “Salt” and a Yamaha TRX 850 in the 2001 movie “Lara Croft: Tomb Raider.”

Actor and politician Arnold Schwarzenneger is a rider. The 1991 Harley-Davidson Fat Boy he rode in “Terminator 2: Judgement Day” sold at auction in 2018 for $520,000.

Actor John Travolta said at a press conference promoting the 2007 movie “Wild Hogs” that there was only one rider in the cast who crashed his bike. In the movie, four middle-aged friends (Travolta, Tim Allen, Martin Lawrence and William Macy) feel they are in a rut with their lives so they decide to take a motorcycle road trip. Travolta said Allen was the only one who crashed, but he only crashed because he was showing off.

Actor Ewan McGregor of “Star Wars” fame has appeared in several “Long Way” motorcycling documentaries: “Long Way Round” (2004) follows McGregor and fellow actor Charley Boorman on an 19,000-mile trek riding from London, England, to New York City; “Long Way Down” (2007) in which they ride from Scotland to South Africa, covering 15,000 miles; and “Long Way Up” (2020) in which they ride 13,000 miles from Argentina through South and Central America to Los Angeles.

Actor Perry King starred in the television series “Riptide” and guest starred in several different television series. He also appeared in numerous movies including “Slaughterhouse Five,” “The Lords of Flatbush” and “The Day After Tomorrow.” A lifelong motorcyclist, King for years has given his time and talent to both the AMA and the AMA Motorcycle Hall of Fame.

Singer Kid Rock appeared in the 2003 movie “Biker Boyz,” a movie starring Laurence Fishburne as the leader of a black motorcycle club. Rock played Dogg, the leader of a rival gang.

Horror novelist Stephen King is a rider and made a guest appearance in one show of the television series “Sons of Anarchy.” He played a “cleaner” on the wrong side of the law who rode a Harley-Davidson Road Glide and cleaned up crime scenes.

Former English soccer player David Beckman served as a spokesman for Triumph Motorcycles. He starred in the 90-minute BBC documentary “Beckham into the Unknown” in which he rode in the Amazon rainforest on a custom Triumph Bonneville T100.

Actor Mark Wahlberg served as Indian Motorcycle ambassador in 2015. In the 2015 movie “Daddy’s Home” in one scene he rode an Indian Chief Classic.

Actress Pamela Anderson is a rider who once owned a 2004 Honda Valkyrie Rune. The former “Baywatch” TV series actress starred in the 1996 superhero movie “Barb Wire” in which she rode an 885cc Triumph Thunderbird. She has also done public service announcements promoting safe motorcycling. 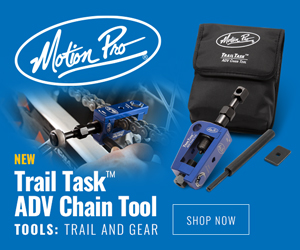 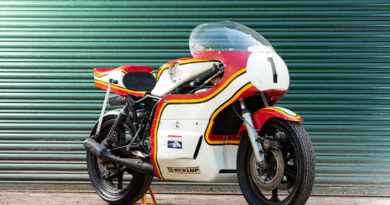 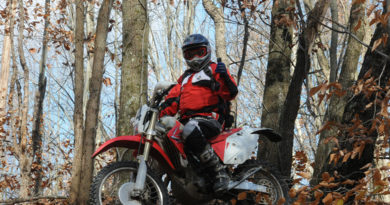 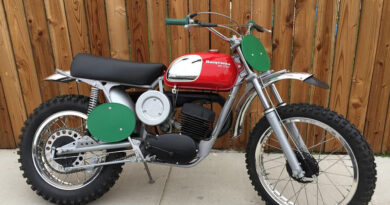 October 17, 2019 Jim Witters Comments Off on Bikes connected to AMA Motorcycle Hall of Famers are sold at auction