Paul Slavik, Brittany Young honored for their contributions to motorcycling

PICKERINGTON, Ohio — The American Motorcyclist Association Board of Directors has selected two recipients for its 2021 national awards, which recognize outstanding contributions in the world of motorcycling and acknowledge support of the AMA mission to promote the motorcycle lifestyle and protect the future of motorcycling.

AMA Charter Life Member Paul Slavik, a longtime employee of American Honda and advocate for off-road motorcycling, is the recipient of the 2021 AMA Dud Perkins Lifetime Achievement Award, which acknowledges the highest level of service to the AMA in any area of activity.

Brittany Young, founder of the B360 (b360baltimore.org) nonprofit that teaches science, technology, engineering and mathematics skills to youths using dirt bikes, is the recipient of the 2021 AMA Bessie Stringfield Award. The AMA Bessie Stringfield Award acknowledges an individual who has been instrumental in introducing or promoting motorcycling to emerging markets.

“The AMA Board of Directors has the privilege each year of reviewing the accomplishments of motorcyclists, groups and organizations that have made significant impact on the riding community,” said AMA Board Chair Russ Ehnes. “This year’s recipients reflect the best of American motorcycling.”

AMA Dud Perkins Lifetime Achievement Award
Slavik participated in AMA-sanctioned competition events in Southern California and the Midwest from the early 1960s to the late 1980s. He worked for American Honda for nearly three decades. Among his positions, he was Honda’s OHV press coordinator and later its national off-highway vehicle coordinator. He retired in 2005.

While at Honda, Slavik helped create the National Off-Highway Vehicle Conservation Council in 1990, was involved the Off Road PALs Program and was a member of the California OHV Stakeholders. He also served on the California Roundtable on Recreation, Parks and Tourism. Slavik served on the Motorcycle Industry Council’s Land Use Committee and was an ATV and dirt bike instructor.

After he retired, Slavik helped coordinate the route designation workshops for the NOHVCC and did some on-the-ground route inventory work for Advanced Resource Solutions in the desert.

“This award came as a big surprise,” Slavik said. “I just didn’t think, in my wildest dreams, that I would receive this award. Those are important people who get these awards, and I am just a guy who was doing his job.”

AMA Bessie Stringfield Award
Young, who is not a motorcyclist, spotted an opportunity in the culture of young people in the Baltimore area who demonstrated their passion for riding by taking to the streets and public parks on dirt bikes and ATVs. She harnessed the energy, passion, creativity and intelligence of those riders and channeled it into classroom instruction.

B-360 teaches STEM—science, technology, engineering and mathematics—by using dirt bikes to demonstrate theories and their practical applications. The organization hopes to create safe, legal spaces where urban youths can ride, while establishing relationships between the riders and city government.

Since its inception in 2017, B-360 has served about 5,000 students and has hired 20 former street-bike riders who went through the program.

“I was very shocked to receive the Bessie Stringfield Award,” Young said. “This is a very different kind of award for me.

“I am a big fan of Bessie Stringfield. I teach about her in my B-360 classes. I am extremely honored to receive an award named for a Black woman. I don’t see myself as a Bessie Stringfield at all. She is a legend. But I represent her legacy. And I want to see more Black people in motorcycling.”

For more information about the AMA Board of Directors Awards Program, to see past recipients and learn how to submit individual’s names for future consideration, please visit americanmotorcyclist.com/For-Members/AMA-Awards/Board-Of-Directors-Awards/board-of-directors-awards. 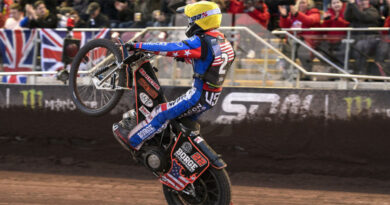