WASHINGTON, D.C. — The Office of United States Trade Representative has again proposed tariffs on motorcycles with an engine size between 500cc and 700cc, along with parts and accessories, imported from countries in the European Union, as part of a dispute over aircraft subsidies. This proposal comes after the USTR announced in October that these motorcycles would not be subject to tariffs originally proposed in April. This continued targeting of the motorcycle community and industry only brings uncertainty and harm to American motorcyclists and the small businesses that support them. The AMA is joining others in the motorcycling community to oppose the USTR’s ill-conceived proposal. Motorcyclists should not be penalized with exorbitant tariffs because of an unrelated trade dispute. Any trade sanctions imposed as a result of this dispute should come from more closely related industries or products. You can make your voice heard on this issue by following this link: https://tinyurl.com/qspkcrc.

WASHINGTON, D.C. — Motorcyclists rode a little less in 2018 than in the year before, according to a report from the U.S. Bureau of Transportation Statistics. Riders traveled 20.1 billion miles in 2018, down about 1 percent from 2017.

PLACERVILLE, Calif. — U.S. Rep. Tom McClintock (R-Calif.) and the El Dorado County Board of Supervisors expressed their appreciation for Forest Supervisor Laurence Crabtree. calling him “an indispensable steward of our forests.” Crabtree will be retiring from the U.S. Forest Service on Jan. 6. Liz Berger, currently deputy forest supervisor for the Tahoe National Forest, has been selected to serve as acting forest supervisor for the Eldorado National Forest beginning in January.

DENVER — A series of listening sessions is scheduled to give OHV riders a chance to share their experiences and vision for off-highway recreation with the U.S. Forest Service, the U.S, Bureau of Land Management, the Colorado Department of Parks and Wildlife, the National Off-Highway Vehicle Conservation Council and the Colorado Off-Highway Vehicle Coalition. More information is available at https://tinyurl.com/w5oefry. The sessions, organized by NOHVCC, are:

SUCHES, Ga. — The U.S. Forest Service has released the environmental assessment for the Foothills Landscape Project, calling for three off-highway vehicle trails in the Chattahoochee National Forest in Georgia to be closed. Those closings and the reclassification of 83.1 miles of Forest Service roads to reduce maintenance costs or implement seasonal access are part of a broad program intended to improve environmental conditions on 157,625 acres of the forest, but could impact the ability to ride. The assessment calls for the closing of parts of the Tibbs, Tatum Lead and Milma Creek ATV trails. Seasonal access would be limited on 2.9 miles of the Muskrat Creek route starting at the Windy Gap trailhead. Finally, a rerouting is proposed on the Oakey Mountain OHV System. Riders can tell officials how they feel about this plan by following this link https://tinyurl.com/u8dpkou. The comment deadline is Jan. 10.

ALBANY, N.Y. — Gov. Andrew Cuomo (D) vetoed a bill that could have lifted state restrictions on electric scooters and bicycles, but that also would have allowed local jurisdictions to regulate or ban them. Cuomo wanted the bill to include a helmet requirement, according to a report in the New York Post.

HARRISBURG, Pa. — About 157 new miles of all-terrain vehicle trails are planned for five projects funded by $647,300 from the Pennsylvania Department of Conservation and Natural Resources ATV grant program. The projects include:

OLYMPIA, Wash. — Beginning today, Jan. 1, residents must pass a basic knowledge and skills test to obtain a motorcycle learner’s permit and pass advanced knowledge and skills tests to get a motorcycle endorsement on their driver’s licenses. Those caught riding without an endorsement face a fine of $48 that can rise to $136 with fees and assessments. The new law also includes an additional penalty of $250. The new law also creates a for a subsidy program to help make rider training more affordable.

ANTWERP — A 10-year-old ban on quads in the city will be lifted Jan. 17. The city enacted the ban on the use of quads in the developed area and on the unpaved roads outside in 2009. Motorcycle Action Group Belgium opposed the ban and has been working since to get quad use restored. According to the MAG lawyer, Stefaan Claeys, the ban was annulled because a general ban is disproportionate and “there is no reasonable link of proportionality between this ban and the intended purpose.” Claeys said that, “You cannot prohibit legal road users from using their vehicles to avoid the inconvenience caused by some of them. Those who cause a nuisance must be tackled by means of road traffic regulations, as is the case for all other road users.”

LOS ANGELES — The Petersen Automotive Museum has announced the promotion of Richard Varner to chairman of its board of directors. Having served as treasurer since 2013, Varner brings more than 40 years of experience as a respected business leader, car collector, vintage racer and professional motorsports series co-owner to his new role. A Wichita, Kansas native, Varner has been collecting and restoring automobiles and motorcycles for several years; his passion led to the formation of professional motorcycle road racing series, MotoAmerica. In addition to serving on the Petersen board of directors, Varner is the Chairman of the California Highway Patrol 11-99 Foundation and a member of the Dean’s Advisory Board at the University of Nebraska School of Business, his alma mater.

WASHINGTON, D.C. — The Smithsonian’s National Museum of American History will be the new home of American author Robert M. Pirsig’s 1966 Honda Super Hawk motorcycle featured in his book, Zen and the Art of Motorcycle Maintenance: An Inquiry Into Values. Pirsig’s book, originally published by William Morrow in 1974, has sold more than 5 million copies and has been translated into 27 languages. The inspiration for Zen stemmed from a monthlong road trip Pirsig (1928–2017) took with his 11-year-old son Chris in 1968. Stored for decades in the family’s New England garage and recently mechanically restored, the motorcycle is a gift from Pirsig’s widow, Wendy K. Pirsig. In addition to the motorcycle, the gift includes Pirsig’s leather jacket, maps, shop manual and other gear from the 1968 ride, together with a manuscript copy and signed first edition of the book. Pirsig’s favorite toolboxes, with tools for maintaining his bike and other vehicles as well as tools he made himself, are also part of the donation.

PARIS, Texas — American motorcycle enthusiast Adam Sandoval set the Guinness World Record for largest parade of Harley-Davidson motorcycles by organizing 3,497 bikes on Oct. 5. Riders from 48 states and Canada participated in the event, which broke a 2010 record set by a group from Greece. In addition to the record achievement, more than $54,000 in registration proceeds were donated to Motorcycle Missions, a nonprofit organization that teaches Veterans and First Responders how to build and fabricate motorcycles.

PICKERINGTON, Ohio — Hayley Bell, founder of the Women Riders World Relay, is the 2019 AMA Motorcyclist of the Year. Bell launched the WRWR movement, which attracted thousands of riders from 84 countries to participate in a leg of the relay, during which a baton made its way around the world. The original intent of the relay was to call attention to the lack of quality women’s riding gear that fits properly and provides adequate protection. But the event also built a network of female riders that Bell calls “a global sisterhood of inspirational women.” The AMA Motorcyclist of the Year designation, awarded annually by the AMA Board of Directors, recognizes the individual or group that had the most profound impact on the world of motorcycling in the previous 12 months.

PICKERINGTON, Ohio — The world of motorcycling has lost three staunch advocates with the passing of AMA Motorcycle Hall of Famers Ed Waldheim and Clark Collins and former AMA Board of Directors member Jim Viverito. Waldheim was inducted into the AMA Motorcycle Hall of Fame in 2007 for his ongoing dedication to the riding community and his tireless efforts to secure, maintain and expand off-road riding opportunities in his home state of California. Collins’ storied career as an advocate for off-road motorcycling includes helping found the BlueRibbon Coalition public land access group, building national and regional coalitions among trail users and helping get the federal Recreational Trails Program enacted into law. He was inducted into the Hall of Fame in 2010. Viverito served on the AMA Board of Directors from February 2010 to July 2016. His service on the AMHF Board, which is tasked with raising money to fund the AMA Motorcycle Hall of Fame, began July 2014.

PICKERINGTON, Ohio — AMA Motorcycle Hall of Famer Dick Klamfoth passed away Dec. 13. He scored his 12 victories in AMA Grand National competition, three of which came in the Daytona 200 — in 1949, 1951 and 1952. He was the first rider to win the Daytona 200 three times and went on to be a motorcycle dealership owner and race promoter. Klamfoth was inducted into the AMA Motorcycle Hall of Fame in 1998.

PICKERINGTON, Ohio — Bradley Timm of Westerville, Ohio, was selected Dec. 6, as the winner of the two Honda motorcycles that were customized to celebrate the life of AMA Motorcycle Hall of Famer Nicky Hayden, the late MotoGP World Champion. Maggie McNally-Bradshaw, chair of the American Motorcyclist Association Board of Directors, selected the winning ticket in a drawing at the Hilton Downtown Columbus before the 2019 KTM AMA Motorcycle Hall of Fame Induction Ceremony.

PICKERINGTON, Ohio — Get your tickets and make your plans to be at Mid-Ohio Sports Car Course in Lexington, Ohio, July 10-12 for 2020 AMA Vintage Motorcycle Days. AMA members can purchase discounted tickets now at www.amavintagemotorcycledays.com/tickets. AMA members save an additional $5 off the already discounted early bird pricing. AMA members can also call (614) 856-1900 to order their tickets. A fundraiser for the AMA Motorcycle Hall of Fame, AMA Vintage Motorcycle Days showcases classic motorcycles of all makes and styles, and honors the riders who made them famous. Activities at the event include the AMA Vintage Grand Championship, which features road racing, motocross, hare scrambles, trials and flat-track racing. In addition, North America’s largest motorcycle swap meet is packed with parts, bikes and memorabilia from all eras. Bike shows feature some of history’s most beloved motorcycles. Attendees will be entertained by stunt shows, demo rides of current production bikes and live music, while seminars on numerous topics by noted motorcycling experts keep them informed. Non-AMA members and those reserving RV spaces must purchase tickets through Mid-Ohio Sports Car Course. These tickets are available online at midohio.com or by calling (419) 884-4000. AMA Vintage Motorcycle Days is a family-friendly event. Admission is free for children under 12 accompanied by a ticketed adult. Free parking is also available on site.

Sign up and stay informed: AMA News & Notes keeps motorcyclists up-to-date on hot topics, news affecting the motorcycling community and opportunities to communicate with elected officials. Click here to check the “Sign me up for News & Notes” box. 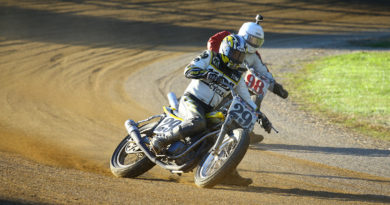 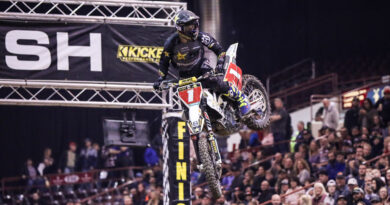 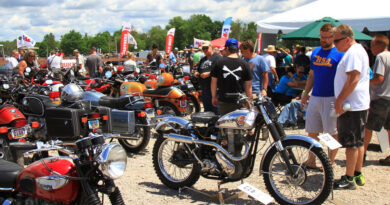