PICKERINGTON, Ohio — Bill Tuman, a member of Indian Motocycle’s famous racing team dubbed the “Indian Wrecking Crew” and winner of five AMA Grand Nationals during a professional racing career that spanned from 1947 to 1955, has died. He was 99.

The Indian Wrecking Crew was a group of top racers in the late 1940s and early ’50s that included Mr. Tuman, Bobby Hill and Ernie Beckman.

Known as the “Rockford Rocket,” the Illinois resident rarely ventured outside the Midwest to race. So, one of his most surprising victories was at an AMA Grand National on the mile dirt oval in San Mateo, Calif., on June 22, 1952. Mr. Tuman beat all of the top riders from the West Coast on one of their own tracks, something that rarely happened in those days.

Mr. Tuman didn’t begin racing until he was 25. While living in San Francisco after World War II, he got a job building racing bikes at the famous Hap Jones race shop. After watching the legendary Sam Arena win a race, Mr. Tuman became hooked on the sport. His first competition bike was a souped-up Indian Army surplus bike.

He earned podium finishes in 1948 and 1949, before taking his first national win in Des Moines, Iowa, on Sept. 17, 1950. A month later Mr. Tuman took his second national win in Reading, Pa. In March 1951 at the annual AMA Awards Banquet in Daytona Beach, Fla., he was voted the AMA’s Most Popular Rider of 1950.

Mr. Tuman’s best season came in 1953 when he won the legendary Independence Day weekend event at Dodge City, Kan., a 200 miler over a two-mile dirt oval, on a Norton.

His full biography is at motorcyclemuseum.org/halloffame/detail.aspx?RacerID=92. 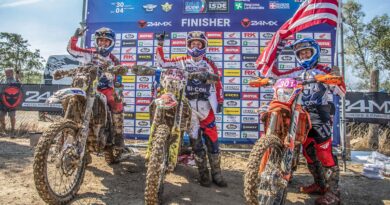 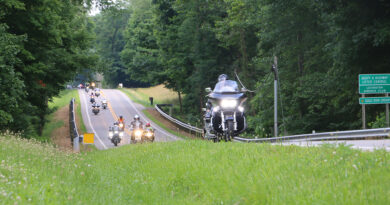 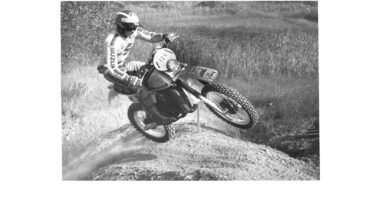