Every year the American Motorcyclist Association honors motorcycling’s most accomplished and significant people in a very special AMA Motorcycle Hall of Fame induction celebration — which will happen on Friday, October 28, at the Violet Township Event Center in Pickerington, Ohio.

“The Class of 2022 includes men and women who have excelled in competition, engineering, design, motorcycle adventure and more,” said AMA President and CEO Rob Dingman. “Some are champions in many of our premier racing disciplines — motocross, road racing, dirt track and speedway — while others excelled in limit-pushing adventures, and helping riders and teams reach their on-track potential. We are honored to recognize these motorcycling greats this Oct. 28 at the AMA Motorcycle Hall of Fame.”

On Saturday, October 29, there is an Open House and Class of 2022 installation exhibit in the AMA Hall of Fame Museum on the AMA campus. The Open House is open to the public. A brunch is scheduled in the late morning, tickets sold in advance only. 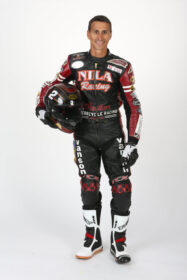 Kenny Coolbeth began his national flat track racing career in 1994, winning the AMA Rookie of
the Year award. He went on to win three AMA Grand National Championship in 2006, 2007 and
2008 while on the factory Harley-Davidson team. Throughout his quarter-century career he
compiled 27 AMA Grand National wins — sixth on the all-time list — and 108 AMA Grand
National podiums.

Born March 30, 1977, Kenny Coolbeth started his national flat track racing career in 1994, going on to win the AMA Rookie of the Year award that season. He also got his very first Grand National podium in 1994 at the Mechanicsburg, Penn., Half-Mile. Coolbeth’s first AMA Grand National win was at the Columbus Half-Mile in 2002.

In 2006, while riding for the Factory Harley-Davidson team, Coolbeth won his first AMA Grand National Championship, and followed that up with two more championships in 2007 and 2008.

Coolbeth retired from professional flat track racing at the end of the 2018 season.

Debuting at the professional level in 2002, Stewart placed second in the AMA Supercross 125 East class and won the AMA 125MX title later that year while riding for Kawasaki. Stewart was named the 2002 AMA Motocross/Supercross Rookie of the Year.

While an injury prevented Stewart from winning another motocross title in 2003, he won every race he competed in that season. In fact, Stewart won all 19 of the 125cc motocross events he competed in from June 16, 2002, to June 20, 2004.

During this stretch, Stewart perfected the “Bubba Scrub” — or just the “scrub” — which became a staple technique for motocross riders moving forward.

In 2005, it took Stewart only three races to claim his first AMA 250SX class win. Two years later, Stewart claimed the ultimate prize when he won the 2007 AMA Supercross Championship. He won his second AMA Supercross title in 2009.

In between his AMA Supercross triumphs, Stewart won all 24 of motos of the 2008 outdoor series to secure the 450 Class National Championship. The only other racer to race a perfect AMA Pro Motocross season was AMA Motorcycle Hall of Famer Ricky Carmichael, who did it twice — in 2002 and 2004.

Adding to his resume, Stewart became a Motocross Des Nations champion in 2006 and 2008.

Over the years, Stewart — who is African American — became one the most popular and followed riders in motocross history, a fact that became especially apparent when he starred in his own reality show titled Bubba’s World — which debuted in 2010. 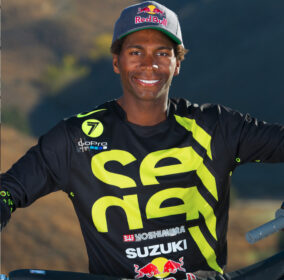 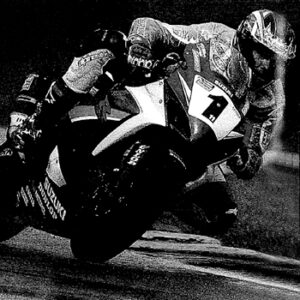 Ben Spies is considered one of the greatest American road racers in the history of the sport. Nicknamed “Elbowz” due to his signature riding style that showcased his kept always-protruded elbows, Spies’ five AMA National Championships include the 2008, 2007 and 2006 AMA Superbike titles, the 2007 AMA Superstock title, and the 2003 AMA Formula Xtreme title. He also competed successfully in World Superbike and MotoGP competition, scoring the 2009 World Superbike championship.
Ben Spies's Biography

Ben Spies is considered one of the greatest American road racers in the history of the sport. The Texan, who earned the nickname “Elbowz” due to riding style that kept his elbows protruded, won five national titles and raced to 44 national wins during his career.

In 2008, Spies got his first opportunity to compete on the world stage as a wild-card rider at the British round of MotoGP. He also competed at both U.S. MotoGP rounds that year — Indianapolis and Laguna Seca — and scored points at all three 2008 events.

In 2009, Spies made the full-time jump to world-level competition by joining the Yamaha Italia team in World Superbike competition. His rookie-year performance was exceptional, with 11 poles, 17 podium finishes in route to the 2009 World Superbike title.

Spies’ full-time foray into MotoGP came in 2010, which was highlighted by a podium finish at Silverstone a second-place finish at the Indianapolis MotoGP and sixth overall for the year, which earned him Rookie of the Year honors.

During the 2011 season, Spies notched his first and only MotoGP win at Assen, Netherlands. Despite crashes and minor injuries, he finished the fifth in season points.

The next year, Spies was dogged by crashes, injuries and mechanical issues. He announced his retirement from racing in late 2013.

The first woman to complete a transcontinental motorcycle ride, Effie Hotchkiss began riding aboard small used motorcycles such as a single-cylinder Harley-Davidson. She purchased a brand-new 1915 Harley-Davidson 3-speed twin and left her job to travel by motorcycle to California. Effie’s mother, who worried about her daughter’s safety, joined her in a Rogers sidecar. Their journey began on May 2, 1915, and once they reached California, the two turned around to head home in late August, finally completing the dream adventure in October.
Effie Hotchkiss's Biography

The first woman to complete a transcontinental motorcycle ride, Effie Hotchkiss’ spark to ride a motorcycle was struck when she watched a group of riders pass by her Brooklyn, N.Y., home. Her riding began with a series of small used motorcycles, and she eventually upgraded to a single cylinder Harley-Davidson. Despite her need for speed, her motorcycle was no match for the local boys on their twins. She even had a run-in with the local constabulary regarding her disrespect for speed limits.

Completely bored with her work in banking, she decided to leave her job and travel by motorcycle to California. She bought a brand new 1915 Harley-Davidson 3-speed twin, using inheritance from her father.

Effie’s mother worried about her rambunctious daughter’s safety traveling cross-country by herself, so she joined her. A Rogers sidecar was purchased for the Harley, aptly suited for her robust mother.

The journey began on May 2, 1915, when the 26-year-old Effie and her 52-year-old mother Avis set off from their home in Brooklyn, N.Y., and pointed the Harley toward the Panama Pacific Exposition in San Francisco. The outfit carried the pair’s camping gear, spare parts, tools and a pistol. Effie had become a competent mechanic and could handle most repairs on her own.

The roads encountered were, at best, hard-packed dirt and, at worst, foot-deep mud. When they didn’t camp, the duo rented lodgings. Through New York and into Chicago, they averaged 150 miles a day. From there they wandered through Missouri and Kansas and into Colorado. One time while riding through New Mexico, Effie had a flat tire but had run out of spare inner tubes, so she twisted a blanket, stuffing it into the tire for a makeshift inner tube. One man watched Effie travel through the dangerous San Marcos Pass north of Santa Barbara in 100-degree heat, saying she was the bravest and most skilled girl ‘driver’ he had ever met.

In San Francisco, the mother and daughter duo toured the exposition, experienced the first transcontinental phone call, and visited the city’s Harley-Davidson dealer where they had a wonderful reception.

The pair turned around and headed home via the new Lincoln Highway in late August. The trip included a stop at the Harley-Davidson factory in Milwaukee where they received a huge welcome and a private tour of the plant. The dream adventure was finally completed in October where Effie regrettably settled back into her clerical position with the banks. 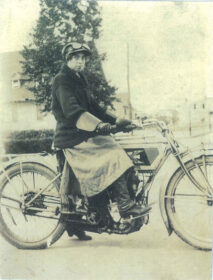 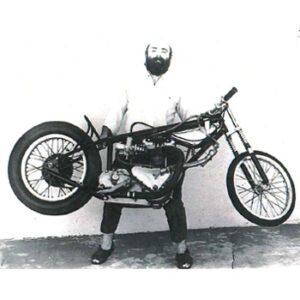 The late Sandy Kosman was a pioneer in aftermarket chassis design and fabrication, an early producer of motorcycle-specific dragracing, flat track and road racing parts and products from the mid 1960s to the 2000s. Kosman found solutions to the increased demands upon competition motorcycles as horsepower increased over the years by creating chassis, brake and wheel systems for different types of racing. He modified frames and swingarms to improve control and handling under racing conditions, and created items such as offset triple clamps to alter geometry and change handling, which was especially useful in classes where frames could not be modified.

Sandy Kosman, born June 21, 1941, began making specialized motorcycle parts from his home near San Francisco before creating a purpose-built shop — Kosman Specialties — catering to the needs of motorcycle racers, specifically drag race and flat track riders, whose bikes developed horsepower in excess of what the frames were designed to handle.

Where frame and swingarm designs were suitable, but lacking the strength to handle more power, he modified or reinforced them. When racing rules for a specific class prohibited altering of the original frame, he developed adjustable or offset triple clamps that would transform the bike for the specific needs and racing styles of the riders and different racetracks. When available wheel and braking systems were not optimal for specific applications, he created new ones.

Kosman’s innovations were noticed by other racers and fabricators and, eventually, the motorcycle factories themselves, whose race teams adopted Kosman’s thinking, advice and fabrication skills. For a 30-year period from the 1970s, most drag-racing bikes, many flat-track bikes, and a handful of early AMA Superbike race teams adopted Kosman products, including American Honda, Vance & Hines, A&A Racing, Performance Machine and others.

Born in Whittier, Calif., in 1970, Hancock started in Junior Speedway in Southern California, earning the Junior Speedway National Champion title in 1985 — the first of many titles to come.

In winning the World championship in 2016, Hancock became the oldest title winner at 46 years, 130 days. He also won the League Championship in the Czech Republic, Denmark, Poland, Sweden, and England.

Besides earning those titles, Hancock has at least 21 GP wins, has finished in the top 5 of World Speedway competition 17 times and in the top 3 eight times. His record for Grand Prix appearances includes a stretch of 177 consecutive race appearances, a staggering number and a testament to the mental determination and physical resilience of one of America’s great racers. 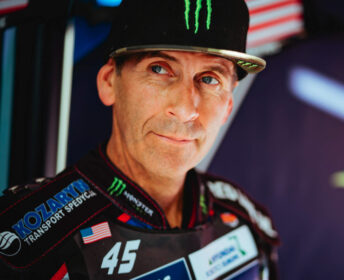