Support the AMA Motorcycle Hall of Fame, and you could win an awesome motorcycle

Each year, the AMA Motorcycle Hall of Fame raffles off one or more historically significant motorcycles to raise money for the charity. All proceeds from the raffle go to support the 501(c)(3). You can receive one ticket for a $5 donation or five tickets for a $20 donation. You must be 18 years or older and a resident of the United States to win.

Lords of the Board Track Custom Motorcycle 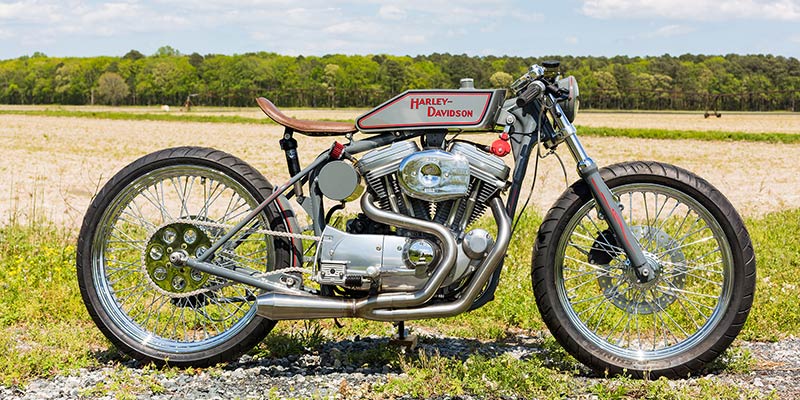 For 2020, the AMA Motorcycle Hall of Fame is paying tribute to Hall of Famers Eddie Brinck, Ralph Hepburn and Shrimp Burns with a custom commemorative motorcycle inspired by board-track racing, one of the earliest motorsports that featured high speed and fearless competitors.

To commemorate that era, Kevin Dunworth of Dunworth Machines, will begin with a 2003 100-year anniversary edition Harley-Davidson Sportster that will be clad in custom parts for performance and style. 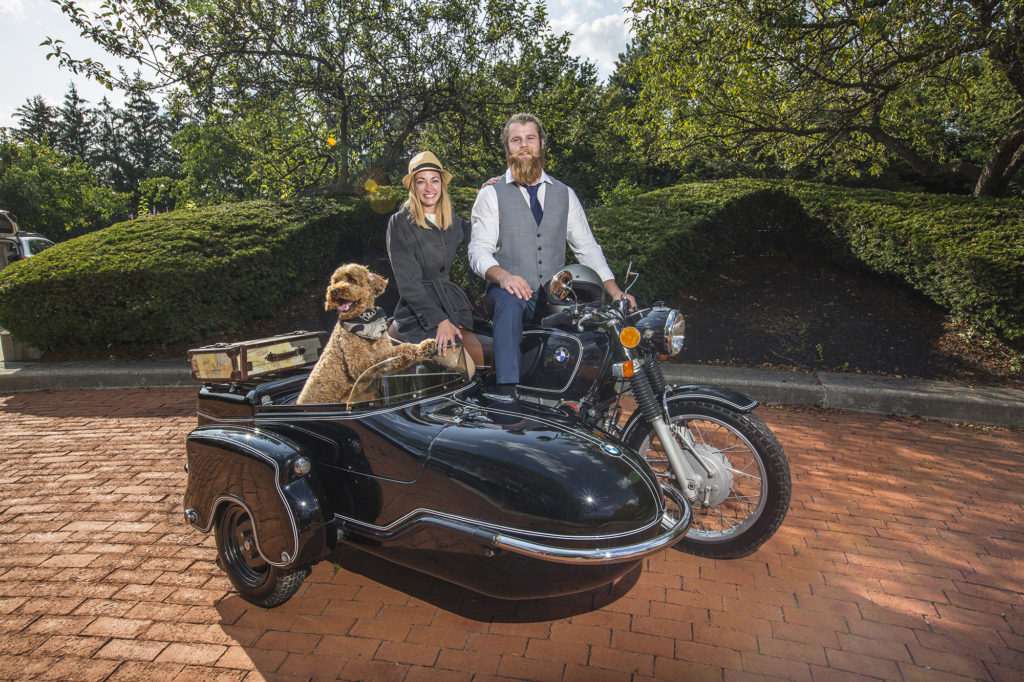 It was 1973. Secretariat became the first horse since 1948 to win the Triple Crown. The classic film “American Graffiti” hit movie theaters. Billie Jean King and Bobby Riggs competed in “The Battle of the Sexes” tennis match. And BMW started rolling out “5-series” motorcycles at its plant in Berlin, Germany.

The “5-series” bikes featured the famed BMW boxer engine turned on its head, with the camshaft below the crankshaft and the pushrods in tubes below the engine. The engine benefitted from a new, high-pressure oiling system. And the bike featured an electric starter. The telescopic front forks were complemented by a swingarm attached to the top and bottom of the twin adjustable suspension units.

This 1973 BMW R75/5—restored by Jay Medieros of Vintage Triumph Supply in Bedford, Mass.—features a classic sidecar, custom upholstery and an elegant appearance.

This motorcycle was won by AMA Motorcycle Hall of Famer Mary McGee on July 11, 2020, in a drawing during an open house and bike night at the AMA campus in Pickerington, Ohio.

Hayden also won the 2002 AMA Superbike Championship, the 1999 AMA 600 Supersport Championship and was the 1999 AMA Flat Track Rookie of the Year. He was the first recipient of the AMA Horizon Award, which was renamed in his honor in 2017.

Hayden passed away on May 22, 2017, as a result of injuries sustained when he was hit by a car while training on his bicycle in Italy.

As a tribute to Hayden, the American Motorcyclist Association and American Honda commissioned two custom motorcycles that celebrate his life and his career as a professional American road racer and flat tracker.

Entries for this raffle are no longer being accepted online. The winning ticket for both bikes will be drawn at the 2019 AMA Motorcycle Hall of Fame Induction Ceremony on Dec. 6, 2019.

The winning ticket was drawn Dec. 6, 2019, at the AMA Motorcycle Hall of Fame Induction Ceremony in Columbus, Ohio. These motorcycles were won by Bradley Timm of Westerville, Ohio.

This 1951 Harley-Davidson FL was powered by the fourth year of The Motor Company’s “Panhead” engine. The 1951 model was updated with chrome-plated piston rings and rocker arms machined with pushrod sockets. It was a 74 cubic-inch V-twin producing over 50 horsepower, more than enough to “turn mountains into molehills…and miles into minutes,” according to Harley-Davidson ad copy from the era.

Also smoothing out those mountains was the hydraulically damped telescopic forks that gave the Hydra-Glide its name. The forks more than doubled the travel of the old springer front end and provided enhanced comfort for riders, whether exploring America’s vast western wilderness or country back roads.

This bike features an optional foot-shift/hand-clutch setup that Harley-Davidson offered at the time.

It was restored by Warren Heir of JR’s Cycle Products in Milwaukee, Wis.

The winning ticket was drawn July 7, 2019, at AMA Vintage Motorcycle Days in Lexington, Ohio. The motorcycle was won by Charles Silvia of Greensburg, Pa.

This two-wheel drive sidecar from Ural Motorcycles is a special edition, outfitted and graphic-designed by Ural ambassadors and AMA members, the Wilkinson Brothers of Indianapolis. The brand new motorcycle was carefully set up and dialed in by one of the nation’s top Ural sales & service dealerships, Heindl Engineering of Eaton, Ohio (also AMA members). From the factory, this Gear-Up model features upgrades and the latest developments from the 75-year old motorcycle manufacturer known for its rugged and adventure-ready sidecar motorcycles.

Inspired by the theme of “Adventure Together,” this raffle bike is meant for exploration with friends or family (or a pet!) who seek adventure in all types of terrain. Whether you’re discovering nearby backroads or taking the long way to a National Park, you’ll no doubt be creating memories that will last a lifetime.

The winning ticket was drawn Dec. 7, 2018, at the AMA Motorcycle Hall of Fame Induction Ceremony in Columbus, Ohio. The motorcycle was won by Lisa J. Malachowsky of Apex, N.C.

This 1941 Harley-Davidson WL is the civilian version of the WLA (the “A” refers to “Army”) produced for the U.S. Army for use during World War II. The WL is built around a high-compression flathead 45 cubic inch V-twin pumping out over 23 horsepower. Known for its reliability, the 750cc WLs were workhorses, whether in “A” trim or the civilian model. This bike is ready to ride with fresh paint and a tune-up from noted Harley-Davidson restorer Mike Wells of C&S Cycle Service in Mount Victory, Ohio. The winning ticket for this motorcycle was drawn July 7 at 2018 AMA Vintage Motorcycle Days, featuring Royal Enfield, at Mid-Ohio Sports Car Course in Lexington, Ohio. The winner was AMA Charter Life Member Don L. Harms of Kirkland, Wash.

This 1975 Yamaha DT100 enduro that “ran when it was parked.” The AMA, in conjunction with Skidmark Garage, offered the bike in the “Ran When Parked” Raffle Bike Challenge at 2018 AMA Vintage Motorcycle Days, featuring Royal Enfield, at Mid-Ohio Sports Car Course in Lexington, Ohio. The goal of the project is to successfully repair the bike and teach AMA Vintage Motorcycle Days attendees the value of maintaining their motorcycles themselves. The project is also intended to raise awareness of the growing community garage movement. The winning ticket was pulled July 8. The motorcycle was won by AMA member Anthony Cox, of Jersey Mills, Pa.

This beautiful 1966 Harley-Davidson FLH is a pristine example of a restored classic American touring motorcycle. The winning ticket was pulled July 9, 2017, during AMA Vintage Motorcycle Days at Mid-Ohio Sports Car Course in Lexington, Ohio. It was won by AMA Life Member Terry Hanser of Tampa, Fla.

This classic BMW was won by AMA member Bill Chick of Indiana, Pa. It was given away on Feb. 17 at the Mama Tried Motorcycle Show in Milwaukee. The BMW was modified and modernized by renowned custom bike builder Tony Prust of Analog Motorcycles in Chicago.

One of the most classic and recognizable American motorcycles, this vintage Indian Chief, with its muscular V-twin engine and deeply skirted fenders, is an iconic machine that has always stood apart from the crowd. The drawing for this Indian occurred July 10, 2016, during AMA Vintage Motorcycle Days at Mid-Ohio Sports Car Course in Lexington, Ohio. The winner was AMA member Mike Easley of Louisville, Ky.

The drawing for the CR250, a throwback to the mid-1980s, when Hall of Famers like Rick Johnson and David Bailey were winning titles for Honda, took place at the AMA Championship Banquet in Columbus, Ohio, on Jan. 23, 2016. It was won by AMA member Ben Horgen of Rochester, Minn.

Pete Gabrail from Minneapolis, Minn., was drawn as the winner of the fully restored 1965 Harley-Davidson FLH Electra Glide — the 2015 AMA raffle bike benefiting the AMA Motorcycle Hall of Fame Museum.

The drawing was July 12, 2015, at AMA Vintage Motorcycle Days in Lexington, Ohio.

The bike, a 1947 Indian Chief, was restored as a rider by its previous owner. The AMA bought the bike at the 2013 Vintage Motorcycle Days swap meet.

Brian’s son, Adam, sits on the Indian. Adam is a 17-year AMA member. His dad signed him up at AMA Vintage Motorcycle Days when Adam was just 10 months old.

Stephen Dwyer from Clermont, Fla., won this beautiful 1948 Indian Chief — an iconic masterpiece of Americana. The winning ticket was drawn at 2012 AMA Vintage Motorcycle Days, featuring Rockers and Mods, by event grand marshal Craig Vetter. The motorcycle not only represents America’s love for big V-twin motorcycles, but speaks to what stirs in the heart of all motorcyclists—a passion for the open road.

Scott Carey of Pecatonica, Ill., won a fully restored 1973 Kawasaki Z1 and a brand-new Kawasaki Z1000 in the 2010-11 Motorcycle Hall of Fame raffle. The winning ticket was drawn at 2011 AMA Vintage Motorcycle Days featuring Kawasaki, Marque of the Year. The Kawasaki Z1 was the machine that took the four-cylinder Superbike design to new levels, with a 903cc dual-overhead-cam engine and pure muscle-bike styling. The Z1’s DNA lives on today in the Kawasaki Z1000 — a modern interpretation of the muscle bike, with a fuel-injected 1,043cc dual-overhead-cam motor that can take you anywhere you want to go. The vintage Z1 was expertly restored by Johnny’s Vintage Motorcycle Company.

David Beall, of Aliquippa, Pa., won the below Hondas in the 2009-10 Motorcycle Hall of Fame raffle. The winning ticket for the Honda CB750, expertly restored by Vic World, and the all-original 1965 Honda Cub, with one mile on the odometer, was drawn at AMA Vintage Motorcycle Days Saturday, July 10, at the Mid-Ohio Sports Car Course in Lexington, Ohio.

The Motorcycle Hall of Fame would like to say a big thank you to everyone that participated in our 2008-09 raffle bike programs! And while we wish you could have all be winners, we know you will join us as we congratulate the winners. They were: