Motorcycle competition isn’t always about getting from Point A to Point B the quickest. One of the more popular disciplines that puts a premium on technique vs. speed is trials.

Trials, or MotoTrials as the sport is known on the national level to distinguish it from its bicycle equivalent, tests a rider’s ability to navigate a section of trail without putting down his or her feet, stalling the motorcycle or crashing.

Trials enthusiasts ride on trails, in backyards, in fields and over obstacles both natural and manmade. Trials clubs host AMA-sanctioned trials events all over the country. These events provide an organized setting, new riding opportunities and a competitive outlet for an active community of trials competitors.

For new riders—or longtime riders wanting a new challenge—trials is a great option.

Baumert is something of a trials evangelist, championing its benefits for riders both young and old whenever he has the opportunity. He says that trials teaches good riding habits, promotes family, offers a supportive competitive landscape, and is a relatively inexpensive, low-maintenance motorsport. 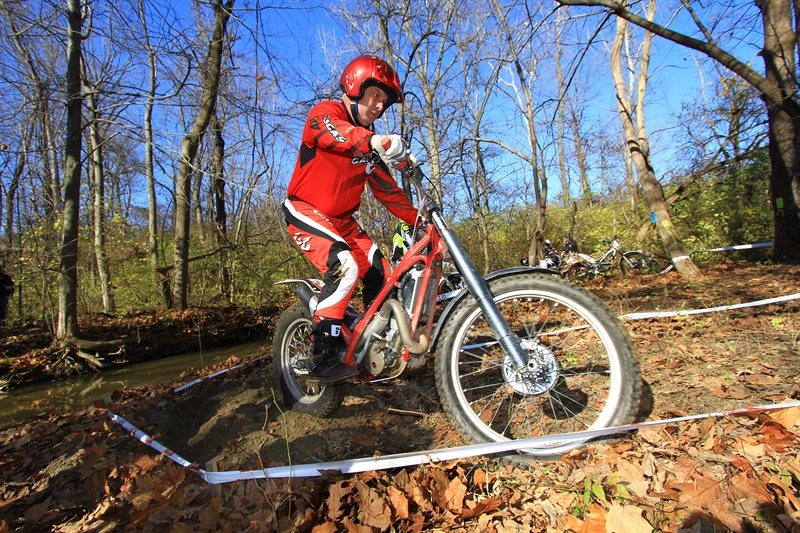 Riders often rush into trying to go fast, skipping over the steps necessary to develop the riding technique that ultimately would allow them to go even faster. Trials, which places no premium on speed and in many ways penalizes it for riders who go too fast and have to put a foot down, instead forces riders to focus on developing that technique.

“If you can ride a trials bike, though sections, you can do any type of motorcycle sport there is,” Baumert says. “[Trials] teaches you the basics: throttle control, clutch control, balance, looking ahead, all the key ingredients to being able to ride on a trail fast.”

“Having that control over the throttle and not having the throttle control you is the biggest key,” Baumert says. “Being balanced on your bike, so when you’re in a corner you’re not too balanced on the inside or the outside—you’re balanced just perfectly and can ride smoothly through corners.”

Baumert says that trials also teaches you one of the most important skills of all, regardless of what type of motorcycle you’re riding: “Looking ahead, making sure that you know where you’re going and not staring at your front wheel and just reacting to things.”

The two girls started at an older age and had the benefit of maturity, Kim says. What was most surprising to them was how quickly the younger twins developed. Both Lucas and Logan were able to balance and ride when they got their first bike—an Oset electric trials bike—for their third birthday.

They started competing the following year.

“I couldn’t believe how they took off and how mature they became,” Kim Conley says. “You could see it. The first year of competing, they needed help. You couldn’t really expect a lot out of them the first year, but every trial event, they got better and better.”

At trials events, different classes follow different marked lines through the sections based on difficulty. Greg Conley says that once Lucas and Logan learned how to read the section signs, it became hard for him to keep up as the boys bounded from section to section on their own.

“When they started, they didn’t read their letters,” he says. “Now they pull up, walk the section, get back on the bike and away they go. They move so fast, I can hardly get close enough to take pictures. It’s pretty cool.” 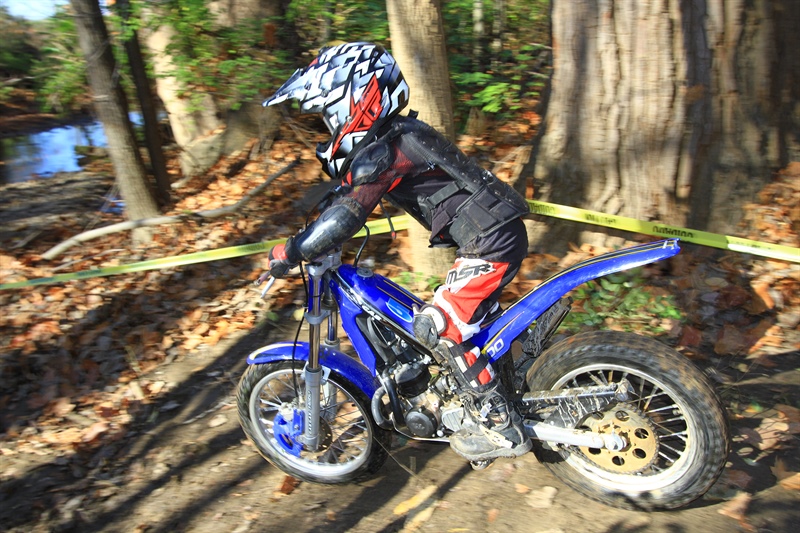 The Conleys say that the sport of trials has provided a number of family-friendly activities for all off them.

Kim Conley sums it up well: “It’s togetherness. It’s all about having fun. There are a lot of sports you can get your kids involved in, but trials you can actually do together. One day, my husband and kids will all be able to go on the loop together. It’s just about being able to do something together as a family.”

That, of course, is true about many disciplines, from harescrambles to dirt track. What makes trials different, Baumert says, is a format that encourages constant communication.

“When you ride a trials together, you’re within speaking distance of each other,” he says. “You’re able to help each other, coach each other through the sections. For a family, for a father and son or a mother or daughter, it’s the best time you’ll ever have on a motorcycle because you’re communicating and helping each other and encouraging each other. If you’re trail riding, you may ride along a length of trail and then stop and talk about it and take off again, where with trials you’re one-on-one all day long.”

For Greg Conley, who rode trials when he was younger, it means a lot to experience the same benefits with his kids that he did growing up.

“Trials is something I did with my brother, and my whole family is into it, and every event with the Trials Inc. group [an AMA-chartered promoting club] is like a huge family reunion,” Conley says. “I’m not knocking other sports, but some of them can get really, really competitive, and you have to spend a lot of money for just a few minutes of riding time. On trials, you have more time on the bike, more seat time, more time with your friends, and after the awards ceremony, everybody sits around and keeps talking.”

There’s nothing wrong with kicking up some dirt or railing ruts through a corner, but responsible high-impact riding is best done on designated trails or tracks.

Trials, on the other hand, produces almost no noticeable environmental impact. The slow speeds, lack of intentional wheel spin, low-air-pressure tires, soft knobbies and very quiet exhausts mean not only can you ride without disturbing the soil, but you can have a conversation at the same time.

For the Conleys, who started their kids on electric trials bikes, the sport was even less invasive.

“We have the electric bikes, and Greg has a vintage gasoline-powered bike and a modern gas bike, and they don’t seem to bother anybody,” she says. “They’re not loud and racing around and tearing stuff up.”

Like most AMA-sanctioned motorcycle competition, trials events welcome riders of all skill levels and on a range of equipment.

“Local events might get 60-70 riders, and they’re all different abilities,” Baumert says. “We have our novice class all the way up to what we call our champ class, which is our top class. In that, you’ll have fun as a beginner trying to get through the sections that are more flat ground, curves and then you’ll advance your way up where you’re in a more advanced or expert class where you’re riding over logs and rocks and other obstacles.”

Sections are carefully laid out by experienced trials riders so all competitors are challenged, but safe. For example, beginner and kids loops will focus on throttle control and turning, while expert lines will require riders to navigate off-camber hills, rooted banks and large logs or rocks.

“Youth B is the beginners, and its very safe,” Kim Conley says. “Youth A is more challenging but if they feel that it’s unsafe, they’re not going to add it to the section. The kids also walk the sections. They can see, OK, here’s something I need to avoid. They might hit a rock and fall over, but the next time around they’ll remember that rock and avoid it.”

Baumert says that trials is more accessible than a lot of other disciplines. One reason is the cost of entry. He says that trials bikes not only remain competitive over time, but their low-revving motors and slower speeds reduce wear and tear.

“You could come to a trials and be competitive with just about any year model trials bike in the lower classes,” he says. “You could get a 10-year-old bike for $1,000 and $1,500 and come out and ride it a couple years before you step up. The bikes are very inexpensive.” Baumert says that riders from sports where horsepower is key will be pleasantly surprised by trials.

“Everything you know about maintenance in motocross or enduro you can throw out the door,” he says. “These motors are watercooled. They don’t rev really high. They’re really a lifetime motor. You won’t ever have to rebuild your motor. You clean the filter, oil the chain and that’s about all you have to do maintenance wise.”

Although protection is paramount, the slow speeds minimizing the possibility of a high-speed crash and the lack of roost in a trials event permit a minimalist approach when it comes to gear, Baumert says.

“You have to protect yourself, of course, with a helmet, some boots and maybe some gloves,” he says. “But other than that, people might ride in blue jeans, or they might ride in the latest trials gear, but it’s all over the board at a local trials. It’s probably one of the easiest entry motorcycle sports there is.”

To find a trials event near you, search the AMA-sanctioned events on this website. For information on the AMA/NATC MotoTrials National Championship Series, see www.mototrials.com.