80th edition of the Daytona 200 set for March 10-12, 2022, at Daytona International Speedway, with new rules, new partners and King of the Baggers on the high banks

In an announcement that could go a long way toward rejuvenating what is arguably America’s most legendary motorcycle race, MotoAmerica revealed earlier today that it will partner with Daytona International Speedway to host the 80th running of the Daytona 200 on the weekend of March 10-12, 2022 in Daytona Beach, Fla.

The Daytona 200, which began on the Daytona Beach shoreline in 1937 before moving to Bill France’s “World Center of Racing” in 1961, will in 2022 feature new rules based on the proposed 2022 World Supersport rules, according to the release. These rules take into consideration several performance-related items that open the door to a wider range of motorcycles being approved to compete, including Triumph’s 765, Ducati’s Panigale V2, MV Agusta’s F3 and others alongside the current Yamaha YZF-R6, Suzuki GSX-R600 and Kawasaki ZX-6R.

The Daytona 200 will also continue to run as an “open tire” event, allowing multiple tire manufacturers to join the competition.

According to MotoAmerica, the Daytona 200 will not be part of its Supersport Championship, a condition that offers the best riders from around the world the opportunity to compete for the minimum $175,000 in purse and contingency that will be offered.

In addition, the MotoAmerica weekend at Daytona International Speedway will form the opening round of the 2022 MotoAmerica King of the Baggers Championship, which means it’ll be the first time Baggers will race on the high banks of a Superspeedway, with speeds expected to exceed 160 mph. Can you say “draft fest?” We knew you could.

“The Daytona 200 is known worldwide to be one of the most exciting motorcycle races in the world,” said MotoAmerica President Wayne Rainey, who won the 200 in 1987. “We are proud to work with Daytona International Speedway, the AMA and FIM North America organizations to continue to enhance the prominence of the Daytona 200. With the new rules in place, we are hopeful that this will open the door to more manufacturers and teams joining us in March. It’ll be a great way to start off the 2022 season. And, wow, Baggers on the high banks! What a spectacle that will be. Obviously, this is MotoAmerica’s first trip to Daytona, and it’s my first trip back to the Speedway since 2008. I’m looking forward to what is going to be a really cool weekend.”

“The AMA is pleased that the Daytona 200 will now be run and managed by our AMA/FIM North America partner MotoAmerica for 2022,” said AMA President and CEO, and FIM North America President, Rob Dingman. “This has been one of our goals since 2015 when we established our partnership with MotoAmerica and facilitated the return of professional road racing sanctioning rights to the AMA.”

More information on the 2022 Daytona 200 will be announced soon, including additional support classes, final rules, entry instructions, broadcast coverage and ticket opportunities, so be sure to keep tabs on the MotoAmerica website at www.MotoAmerica.com . See you in March! 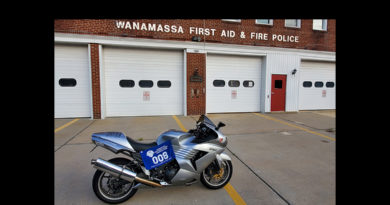