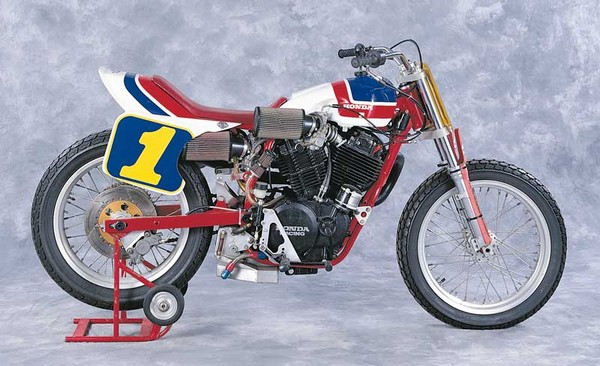 Harley-Davidson has dominated the AMA’s Grand National Championship since the inception of the series in 1954. But there was a time in the mid-1980s when Honda took over as the series king—winning four championships in a row.

This is the bike that made it happen: the RS750.

This actually was Honda’s second attempt at building a flat-track bike. The first was the NS750, based on a bored-out version of Honda’s street-going CX500 motor. The company campaigned that bike in 1981 and ’82, and it managed to win one race.

Then Big Red used all it had learned to create the purpose-built RS750 for the next season. The new dirt-tracker made several shakedown runs in the 1983 Grand National Championship, even winning the Du Quoin Mile with rider Hank Scott at the controls.

By 1984, Honda was ready to go championship-hunting in earnest. The company hired ’82 champ Ricky Graham and Bubba Shobert to make a full assault on the title aboard RS750s.

Honda’s air-cooled, V-twin, 749.5cc powerplant clearly benefited from close study of the Harley XR750, introduced in 1972. It is, for instance, no coincidence that the RS750 ended up with identical bore and stroke dimensions to the Harley—79.5mm x 75.5mm.

But there were significant differences in the bikes as well. The Honda, developed a decade later, came with an overhead camshaft and four-valve heads. The Harley used (and continues to use) pushrods and two valves.

That newer technology appeared to give Honda an edge, especially in horsepower. But in dirt-track racing, getting that horsepower to the ground has always been the important part.

Honda clearly got that part of the equation right, too. In ’84, the first year of the full factory effort, Graham edged out Shobert by a single point to win the title and give Honda a 1-2 series finish. Then Shobert, riding this bike, owned by Chris Carter of Menlo Park, California, as well as other machines, reeled off three consecutive championships from 1985 though ‘87.

These days, Shobert’s RS750 is on display in the Motorcycle Hall of Fame Museum on the grounds of the AMA headquarters in Pickerington, Ohio. It is shown just as it was when Shobert won his final Grand National race—the 1988 Du Quoin Mile.